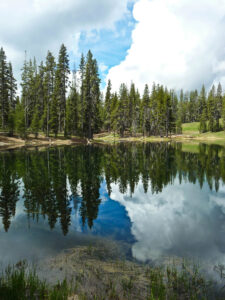 Multiple studies affirm that lakes provide early indications of climate change influencing the lake ecosystem and surrounding catchment areas. The impacts can warp ecosystem functions as well as structure due to climate-driven fluctuations in water level and changes in ice formation and thawing regimes that determine lake phenology and morphology. The greatest benefit to using lakes to document climate forces is how readily available the data is—either already documented and established or in the form of live data being collected manually and remotely across the world.

In a synthesis paper published by the American Society of Limnology and Oceanography, the researchers sought to identify lake variables “that respond to climate forcing and assess the complexity and difficulty associated with using these variables as indicators of climate change.”1 The team further considered the following research questions:

The first step was to use existing data to identify key properties of lakes and then determine those that are most likely to indicate the effects of climate change. Once identifying the variable, the team considered possible confounding effects, the frequency of the variable and the visibility of each indicator. The team then categorized the indicators based on different lake types within different climate regions to test the universality of the claim. Finally, they addressed the expected challenges with using the indicator variable to extract climate signals.

With all of the indicators, the authors note that are some limitations to their efficacy. In particular, altitudinal and seasonal variances were often cited as being confounding variables in using one of these indicators. In short, lakes are effective sentinels of climate change, but sources must be considered on a lake-by-lake basis.