It’s been well established that lakes are effective sentinels for climate change, due to their unique sensitivity to climate changes by integrating information on those changes in catchment.1 As such, understanding how a changing climate can impact lake vulnerability is relevant to planning future conservation efforts. Lakes function as indicators of climate change’s impacts and can be used to determine the overall health of a system. If future scenarios threaten the health or quality of the water systems, then these valuable indicators could be lost.

One way these impacts can be assessed is by examining the mixing regime of lakes. A mixing regime is a physical parameter that describes the timing and frequency in which a lake’s temperature homogenizes annually. The impact of these regimes exerts the largest overall influence on the functioning of lake ecosystems when compared to other physical characteristics.2 All of this is to say that “a change in mixing regime massively alters a lake by enhancing or preventing vertical fluxes of nutrients and dissolved gases.”2 These changes can go on to impact food web dynamics and other aspects of the system. 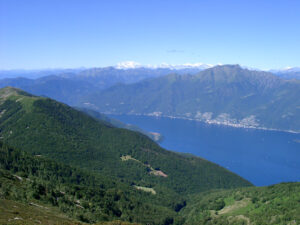 Investigating what makes lakes vulnerable to climate change holds important value as climate variability grows. A 2021 study hypothesized that “lake response to climate change varies as a function of altitude.”2 This hypothesis implies that a lake’s altitude may be able to be used in predictions surrounding climate change impacts. The study investigates altitude-dependencies on climate change by modeling the response of 29 lakes in Switzerland ranging in altitudes between 193 to 1797 meters.2

In order to assess future climate change, the researchers created three distinct scenarios (referred to in the study as Representative Concentration Pathways or RCP) to consider in regard to lakes at various altitudes. The number that follows each RCP distinction indicates the increased radiative forcing compared to preindustrial levels. In order to make these comparisons, researchers focused on the period from 1981 to 2099.

The worst-case scenario was RCP8.5, which implied continuously rising global greenhouse gas emissions. Next was RCP4.5, which depicted emissions peaking around 2050 and then declining for the remainder of the considered years. Finally, RCP2.6 was designed to be the most favorable. RCP2.6 limited global warming to 2 degrees Celsius and “requires stringent measures for emission reduction and net negative emissions towards the end of the twenty-first century.”2 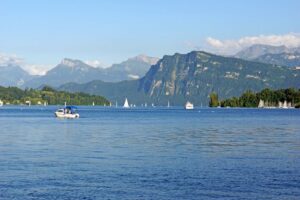 The research on the lakes confirmed altitude-dependent trends associated with several climate variables. Air temperature trends were approximately 20% larger at 1700 meters in comparison to those at 450 meters. In contrast, surface downward solar radiation was projected to decrease at high altitudes. “Average annual heat fluxes among Swiss lakes display an altitude-dependent change in the response to climate change, strongest for RCP8.5 and weakest for RCP2.6.”2

Heat-flux trends were primarily attributed to reduced lake ice cover, which leads lakes to absorb higher amounts of heat in the form of incoming longwave radiation and surface downward solar radiation. The same phenomenon is assumed to be responsible for the increase in net annual absorbed shortwave solar radiation in high-altitude lakes. Overall, higher altitude lakes are considered to be more vulnerable to climate change variables when compared to lower altitude lakes.