Microplastics are small pieces of plastic debris that have made a name for themselves in aquatic research as the waste can be found in every facet of aquatic life. Despite microplastics being most discussed in marine research, they are increasingly common and relevant in lake environments as well. Previous research found that “Average microplastic concentrations reported in the Laurentian Great Lakes […] are as high as or greater than that reported from some oceanic gyres.”1,2,3,4 Since microplastics can negatively impact environments, researchers have begun to see the importance of surveying microplastic data in the Great Lakes region, with the exception of Lake Superior. 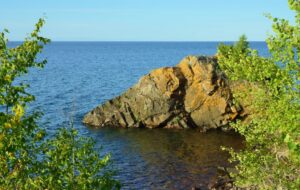 Lake Superior is often considered a relatively pristine environment, with low population density, largely forested, and its clear and cold waters. As a result, it is often left out of pollution-related studies. However, a 2021 research article sought to remedy this gap, finding that Lake Superior may be as impacted by microplastic pollution as other Great Lakes. The study reports on the first lake-wide study of microplastics in Lake Superior.

The team gathered microplastic samples using both single net sampling and side-by-side, paired nets. There was no difference noted between the net types as both captured the same approximate amount of microplastics when cast. However, the researchers did note there was greater variation found in the trawl closest to the boat-side. This likely occurred due to wave disruptions caused by the boat’s wake, impacting the nets sampling ability.

All samples were processed using a modified National Oceanic and Atmospheric Administration marine debris protocol. Samples were emptied into a set of two stacked stainless-steel sieves and then the largest samples were manually sorted from their organic material. Organic material was then rinsed with deionized water through the sieve to capture any remaining smaller microplastics. The smaller plastics then underwent wet peroxide oxidation which is an exothermic process that digests organic material. The samples were then sorted based on size and placed in individual petri dishes. Samples were removed, counted, categorized by morphology as fragment, pellet, line/fiber, film, or foam and then archived for later spectroscopic analysis. 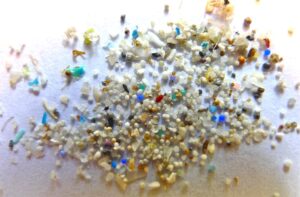 The survey was conducted during the summer of 2014, during mild weather and lake conditions. 94 paired surface water samples were collected across Lake Superior. In the end, the researchers gather 87 individual samples (one was broken in transit). “Plastic particles were found in all 187 samples, yielding a total of 3887 particles.”1 Microplastic abundance across the lake average an approximate 30,000/km2, suggesting a total count of more than 2.5 billion plastic particles across the total surface of Lake Superior.

Considering Lake Superiors low human population density and a variety of other factors, researchers were surprised to see such high abundances. However, when compared to other Great Lakes that have been assessed, Lake Superior was not far off from the others. Lake Michigan showed an average of approximately 17,000 particles/km2, “while Lakes Huron, Erie and Ontario were higher, averaging approximately 46,000, 160,000 and 230,000 particles/km2.1,5,6 The results of the study in comparison to other Great Lake surveys indicate that “inter-lake variabilities seem to arise from a combination of lake surface areas, population densities within the watershed, and lake residence times.”1 However, more research on the matter will have to be conducted in order to confirm these connections.