Onondaga Lake in New York was once considered to be one of the most polluted lakes in the United States. However, over the past few decades, Onondaga Lake has found itself at the center of many policy reforms focused on restoring the watershed. The North American Lake Management Society shares a comprehensive reflection of what changes helped repair Lake Onondaga, as well as noting the improvements observed in the ecosystem thanks to the intervention of state, federal and local regulations. 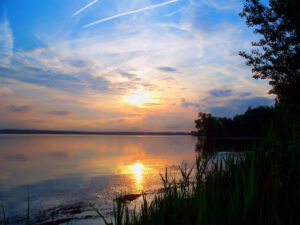 The intention of the synthesis was to “illustrate the significance of considering the complex interplay between nutrient control and both top-down and bottom-up influences on ecosystem structure and function.”1 When creating the plan to repair decades of damage to the lake, stakeholders recognized that existing nutrient levels would need to be restored to more appropriate concentrations. In particular, phosphorous and nitrogen levels were of concern as both lead to cascading effects on algal blooms, dissolved oxygen cycling and habitat suitability.

Data Collection and the History of Onondaga Lake

Onondaga Lake is located in central New York State, measuring approximately 7.6 kilometers long, between 1 and 2 kilometers wide, and has a surface area of 11.7 square kilometers. NALMS reports that “The Lake’s maximum depth is 19.5 meters, and it averages 10.9 meters deep.”1 The lake suffered declines in environmental quality for years as a result of pollution from the Syracuse Metropolitan Wastewater Treatment Plant (Metro).

In order to demonstrate compliance with treatment strategies as well as monitor the changes the lake undergoes as it improves, Onondaga County was required to design and implement a comprehensive ambient monitoring program. The ambient data used to track compliance and trends are collected at the lake’s deepest point.

“Treated wastewater contributed 40 percent to 60 percent of Onondaga Lake’s external total phosphorus (TP) load in the 1990s.”1 State-led treatments were able to lead to drastic decreases in phosphorus levels due to tertiary phosphorus removal using high-rate flocculation settling, which began in 2004. Since 2007, average total phosphorous concentrations have been close to meeting state regulations of 20 µg/L for recreational waters. 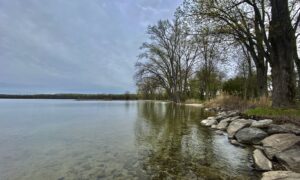 A view along the shoreline at the north end of Onondaga Lake as seen in May 2022 from the Willow Bay section of Onondaga Lake Park in the Town of Salina, New York. (Credit: Andre Carrotflower via Wikimedia Commons CC BY-SA 4.0)

Historically, nitrogen in all forms has appeared in high concentrations in Lake Onondaga. “About 90 percent of the external ammonia load came from Metro.”1 In order to respond to these abundances, Onondaga County upgraded aeration treatment at Metro in the 1990s and, in 2004, implemented biologically activated filter (BAF) technology to stem the continued loading. BAF converts ammonia to nitrate year-round through a process known as nitrification. The efforts were proven to be significant in 2008 when the lake was removed from New York State’s 303(d) list of impaired waterbodies for ammonia concentrations.

Maintaining high nitrogen-to-phosphorus ratios in the upper portion of the lake is one of the strategies implemented in order to reduce the risk of cyanobacterial blooms. The combined results of nitrogen and phosphorous management strategies led to deceased phytoplankton and cyanobacteria production, helping to improve other elements of the lake chemistry. Water clarity, dissolved oxygen cycling and nutrient cycling regimes have improved under the newly implemented protocols. While the history surrounding Onondaga Lake is like that of a cautionary tale on the impacts of pollution, current restoration work shows that the lake also serves as a success story of how restoration can succeed.