As recent years have been marred by declining water quality, biodiversity losses and global climate variances, the Convention on Biological Diversity (CBD) has made protecting freshwater resources part of its top priorities. The CBD proposed a goal of protecting at least 17% of ecologically representative waters—the likes of which serve important ecosystem services and are host to local wildlife. 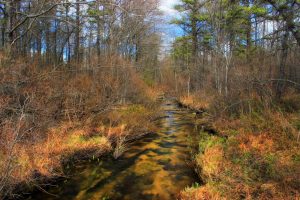 Jeans Run near its headwaters in Hughes Swamp, Carbon County, within State Game Land 141 (Nicholas_T, via Flickr CC BY 2.0)

In observing these protections, how lake protection is defined can be the difference between meeting the target or falling short of the finish line. A 2019 study challenges how lake protections are defined, advocating for the inclusion of lake catchment areas, also known as watersheds, that extend beyond lake centers. And this skepticism is within reason, 17.8% of lakes fell within multiuse or strictly protected areas, but only 7.5% of lakes saw greater than 80% of their catchments protected.1 Since catchment areas are still vital parts of lake ecosystems, the researchers sought to conclude if CBD targets are met when considering the entire water system.

Since definitions of lake protection can have a large impact on how systems are graded, the research team quantified the protection of lakes and their catchments in the U.S. by asking the following:

After quantifying lake protections, the team classified protected lakes into four groups: Lakes with inflow streams and at least one upstream lake, lakes with inflow streams, lakes at the headwaters of stream networks with at least one outflow stream, and lakes without inflows or outflows.2 Beyond lake protection classification, the study identified drainage streams, headwaters and isolated lakes as the three most common connectivity classes in the United States. All of which occur at varying frequencies throughout the U.S. and are awarded different levels of protection. 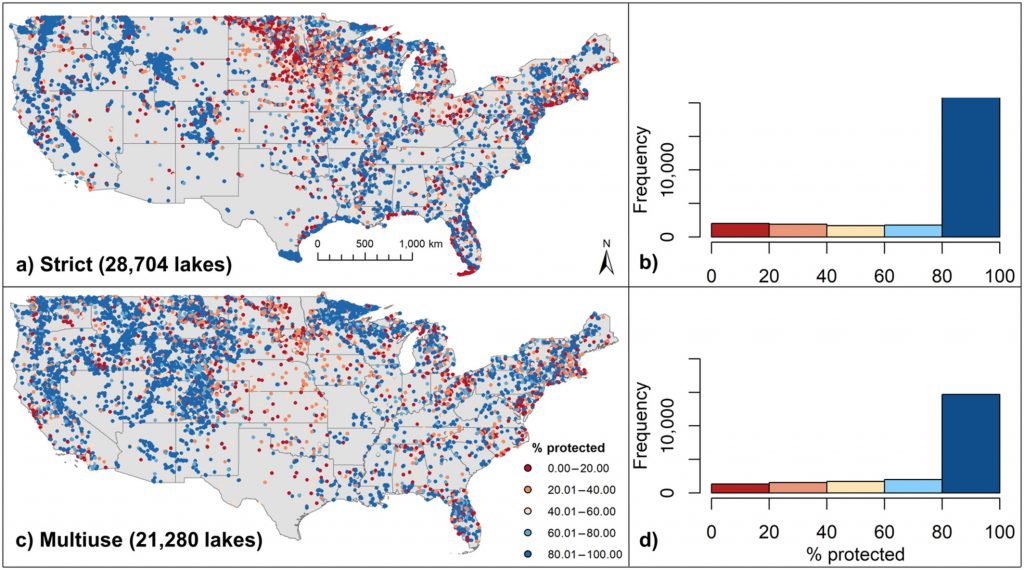 Spatial and frequency distributions of percent lake catchment protected for lakes ≥ 1 ha that occur in (a, b) strictly and (c, d) multiuse protected areas. Lakes were considered protected if their centers occurred within protected areas in the U.S. Protected Areas Database v. 1.4 (USGS ).

Including the total watershed in assessments expands the area needing to be protected. As a result, the percentage of protected freshwater lakes declined as many protection programs focus on only lake centers, not headwaters or surrounding wetlands. Overall, under the narrower and more ecologically relevant protection groups, only 12.7% of lakes were considered to be protected, well below the CBD target of 17%.1

Despite lakes of all connectivity classes being highly important for species’ movements and other ecological shifts, “isolated lakes are disproportionately unprotected and are important for semiaquatic species that rely on the integrated aquatic-terrestrial landscape.” 3, 4

The reason for these lackluster performances can be attributed largely to how catchment areas are treated in the U.S. The study reports that most lake catchments contained little protected land–approximately 85% of the lake catchment surveyed were less than 1% protected.1 Excluding catchment areas from protections and considerations in conservation efforts greatly diminishes the importance of these areas. Watershed variables are vital to lake center health as well as being critical habitats for native species, making the protection of catchment areas essential.

Ultimately, the study concludes that the CBD guidelines are too close-minded and ignore the environments that surround and feed lake centers. As a result, they recommend that the CBD conservation target be modified to incorporate both waterbodies and watersheds as well as explicit consideration of freshwater connectivity.