During a research campaign entitled IceBlitz, the Great Lake Ecological Observatory Network analyzed ice data from 31 different lakes from December 2020 to April 2021. In total, 31 lakes in the Northern Hemisphere were sampled by participants in hopes of understanding the temporal and spatial variability of ice—more specifically, white ice. The research focused on identifying when various ice types formed and under which conditions while highlighting the risks that come with changing ice conditions. Previous studies and IceBlitz data confirm that less stable ice forms more frequently during warmer winters that go through multiple freeze-thaw cycles. Therefore, GLEON concluded that “under continued global warming, the prevalence of white ice is likely to substantially increase during the critical period before ice-off.”1

When defining characteristics of lake ice quality, GLEON used the following standards, ice thickness transparency, crystal structure and impurities. Ice transparency is categorized as either clear or opaque, also referred to as black and white ice, respectively. Aside from appearance, white ice has about “half of the load-bearing strength compared to black ice,” and significantly reduces the penetration of photosynthetically active radiation.1 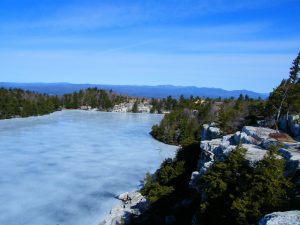 Photosynthetically active radiation decreases as the white ice layer thickens, approaching “zero when the white ice layer reaches a thickness of 30 cm.”1,2 Ice type is therefore very important to limnologists and ecologists as light conditions influence the composition of winter and spring plankton and fish.

Weakened ice is also no small matter for the people residing near these lakes. Many communities rely on lakes and streams freezing over in the winter for transportation, recreation, and maintaining natural ice cycles. From a recreational standpoint, the poorer stability found in opaque ice can lead to increased winter drownings as previously safe waters can no longer support the vehicles or people that utilize the ice-covered waters.

Central and Northern Sweden are known for their particularly cold winters, with February being recognized as the month people can typically walk on ice safely. However, in February of 2021, ten people drowned by falling through ice, marking the highest winter drowning rate in the country since records began.3 In contrast to white ice, black ice can withstand greater weights and is, therefore, safe to traverse. However, as winters warm, the frequency of black ice declines, whereas white ice increases.

White ice occurs most often when temperatures fluctuate around the freezing point, so the IceBlitz campaign ran from winter to early spring and focused on sampling ice-covered lakes. The participants sampled “total ice thickness, the thickness of black and white ice, the thickness of snow and/or slush layers on top of the ice layer [and] water temperature in the drilling hole and air temperature 1.5 m above the drilling hole using a standardized protocol.”1

In the end, 31 lakes were sampled, and 167 ice quality measurements were compiled. When sampling began in December 2020, white ice thickness was predominantly absent in the lakes surveyed. However, as the months progressed, it became the dominant ice type in the surveyed environments. By February 2021, white ice made up 52% of total ice thickness.

Almost every lake sampled reported an increase in white ice frequency as the temperatures warmed, which leads to greater concerns about how global warming will continue to impact ice thickness as the globe warms. As temperatures and other weather conditions vary, lakes across the world will enter more frequent freeze-thaw cycles, which lead to the creation of white ice. While future research needs to be done to draw further conclusions, current ice-safety guidelines and winter monitoring may need to be adjusted to prevent unnecessary harm to surrounding communities.