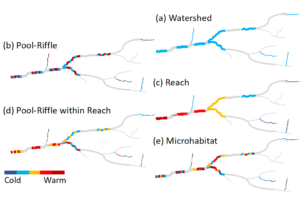 The ten reaches are colored according to temperature at a given time step to demonstrate possible scales of variation (Credit: Leathers et al., 2022)

A 2022 study examined space and time variances in thermal vulnerability in the southern part of the Sierra Nevada mountain range. More specifically, the research examined the Bull Creek stream network, a watershed in the Kings River Experimental Watersheds. The system was chosen because it is comprised of various habitat types. “Habitats within Bull Creek range from meadow-dominated headwaters to Sierra mixed-conifer forest bordered mainstems, and the watershed geology consists of Cagwin soils, derived from granite.”1,5

In July 2020, the researchers deployed 120 Onset Mx2202 for 12 months, logging temperature and light data every 15 minutes. The use of these sensors allowed researchers to examine a variety of thermal regimes from microhabitat scales to the whole watershed. Each water temperature sensor was deployed concurrently with a land-stationed air temperature sensor. The research team also gathered complimentary environmental data for each sensor site, including canopy cover, conductivity, elevation, stream width, depth, velocity, and channel morphology.

Researchers used temperature data to make predictions for future warming scenarios. They then compared these predictions to known temperature sensitive macroinvertebrate taxa living in the watershed to determine how these organisms would be impacted by the shift. 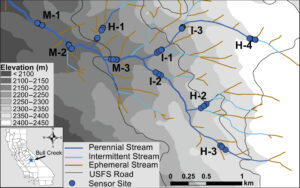 Map of study sites in Bull Creek watershed, California, following a nested spatial design. Each of the 10 reaches had three pairs of pool-riffle sites (often overlapping in the representation due to mapping exact GPS coordinates) (Credit: Leathers et al., 2022)

Data gathered supports the team’s hypotheses. First, the team believed thermal sensitivity would be time-varying and peak alongside air temperate during the summer months. The premise was upheld as both mean air and water temperature peaked in late July and August. Second, the team believed that the individual reach scales (based on watershed, pool-riffle or microhabitats) would explain the spatial variance in temperature due to groundwater influence and channel morphology. Unsurprisingly, examining the Bull Creek system through multiple reaches uncovered thermal regimes that varied across reach scales.

The researcher determined the preferred habitat temperatures for the overall community and the more sensitive Ephemeroptera, Plecoptera, and Trichoptera subsets. After determining the range of temperatures, the team looked to their future predictions and found that conditions weren’t promising. The team predicted, “A thermal mismatch by the end of the century that may threaten or locally extirpate up to 27.2% of macroinvertebrate taxa.” 1 Such a loss would have major implications for the rest of the ecosystem as an even greater percentage of species could face thermal stress, further impacting the population. In order to better understand how these losses might impact local ecology, greater sampling and more diverse studies must be conducted.