Both lakes and ponds are standing or slow-moving bodies of water. There are no official or scientific differences between lakes and ponds. Lakes are larger than ponds, but size is relative. What would be considered a pond in one region might be considered a lake in another. In general, water bodies that are considered lakes in dry areas would only be considered ponds in regions with abundant water resources where there are more (and larger) bodies of water. Despite the lack of official characteristics, there are several questions that are used to generally distinguish ponds from lakes:

If these questions can be answered with a “yes,” the water body is likely a pond and not a lake.1 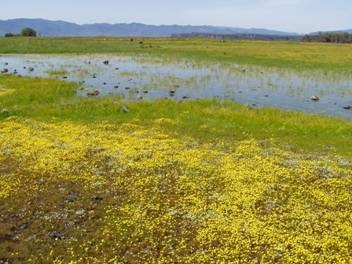 Although vernal pools dry up regularly, they are important sites for breeding and feeding for many organisms (Image from 4).

Ponds are often overlooked as habitats and sources of biodiversity, but they play many important roles in the landscape. Many types of organisms spend at least part of their life in pond habitats, which function as important breeding grounds. Amphibians spend their juvenile stages in ponds, as do many insects. Some ponds, like vernal pools (Figure 1) are temporary and only filled with water for part of the year. However, theses pools are still teeming with life and are inhabited by organisms such as faerie shrimp, salamanders, and wood frog tadpoles while they are inundated with water. Ponds also function as important stopover spots for migrating birds. These spots provide places to rest, as well as a source of food for migrating waterfowl.2

Lakes and ponds are standing bodies of water while rivers and streams are distinguished by a fast-moving current. While there appear to be clear distinctions, the differences become subtle in regions where rivers widen and current slows such that the river could be considered a lake or a pond. Additionally, rivers may occasionally form lakes such as oxbow lakes when portions of a river become geologically separated from the main flow path over time.

River systems make up about 0.0001% of the Earth’s water. While this may not seem like much, rivers drain more than 75% of the Earth’s surface. Rain and other types of precipitation move water overland, through terrestrial ecosystems and into river systems. The resulting runoff brings inputs of sediments, nutrients, and materials into the river, causing running waters to be highly influenced by their surrounding landscapes. The flow of river systems carries the sediments, nutrients, and other materials through the landscape and into other systems, providing vital linkages between the land, lakes, wetlands and oceans. It is because of this that rivers are often referred to as the environment’s circulatory system.5

Reservoirs, also called impoundments, are man-made lakes. Often, reservoirs can be thought of as a combination of lakes and rivers because they were created by building a dam and flooding a river valley. This damming and flooding creates an artificial lake, filled by the river inflow, with the same qualities of rivers and lakes.

Reservoirs are built for many uses. Some are built strictly for recreation (such as fishing and boating) or to control floods. Others are built to store water that may be used for drinking water and irrigation. Finally, hydroelectric dams use the flow of water over turbines to generate electricity. 6

People are most familiar with freshwater lakes. Chances are the lake closest to you is a freshwater lake. But some lakes are extremely salty. These are called saline lakes. Although freshwater lakes often have minor amounts of dissolved salts in them (less than 1-3 g/L), saline lakes have more than this (between 3 and 300g/L). 7 Saline lakes are often found in arid environments where water only leaves lakes through evaporation or seepage into the ground. This evaporation concentrates salts and other chemicals in the water over time.

Although many freshwater lakes and rivers drain into the ocean, saline lakes are formed when they are the endpoint to river flow. These lakes are known as endorheic (which means terminal), and are sometimes referred to as inland seas.8 Endorheic lakes usually form because they are at the lowest point in the landscape and are found in basins throughout the world. Well-known endorheic lakes include the Dead Sea (Israel/Jordan), the Great Salt Lake (Utah), Mono Lake (California) and the Caspian Sea (Eurasia). 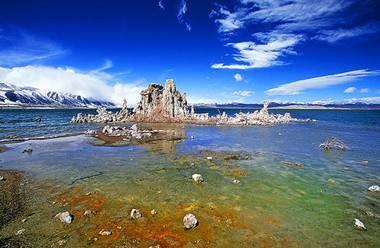 Mono Lake, an endorheic lake in California, is extremely salty because water only leaves the lake through evaporation or seepage. Evaporation concentrates salts, and other chemicals such as arsenic, in the lake over time.

Saline lakes such as the Great Salt Lake in Utah provide important habitat for many kinds of organisms. Some saline lakes are too salty to support anything but algae, but lakes such as the Great Salt Lake are habitats for crustaceans including brine shrimp. The shores and waters of these lakes also provide valuable habitat and breeding territory for birds such as shore birds and waterfowl.9

Inland seas are an important source for mineral trade and often have a great cultural significance. These lakes however are very sensitive to changes in climate. Because of high rates of evaporation in the areas they are located, even small reductions in precipitation can drastically reduce their size. With the reduction in size due to decreased inputs of freshwaters, salinity concentrations increase, which can change the biota and lead to decreased biodiversity. 5

More on How Lakes Differ…