Lakes come in just about every size, shape, and location imaginable. Here are some interesting facts about lakes at the extremes.

A tragic phenomenon occurred in Cameroon in the mid 1980s, where lakes seemed to be killing people. The first event happened in 1984, when 37 people near Lake Monoun died suddenly. The second event, however, was much more deadly. In August 1986, Lake Nyos released a cloud of carbon dioxide (CO2) which hugged the ground and flowed down surrounding valleys to suffocate thousands of local villagers and animals. Overall, more than 1,700 people were killed as far as 26 km away from the lake13, 14. A third lake, Lake Kivu, on the Congo-Rwanda border in Central Africa, is also known to act as a reservoir of carbon dioxide and methane. These three lakes contain very high concentrations of CO2 in their depths and can be lethal to thousands of people that live around them. If Lake Kivu were to explode, over two million people who live around it would be in danger13.

The science behind the buildup of CO2 is fairly simple. These deep lakes occur near a dormant volcano. The real danger is generated by subsurface magma about 50 miles below the lakes. The magma releases the CO2 and other gases, which travel upward through the Earth. The CO2, instead of being released harmlessly into the atmosphere, collects in the cold water at the bottom of the lake. The amount of gas that can be dissolved in the water is dependent on water temperature and pressure. The greater the pressure and colder the water, the more gas can be trapped. None of this would be particularly hazardous if the water at the bottom of the lake were to regularly rise to the surface, where the gas could be safely released. The problem is that the waters of these lakes, like many tropical lakes, are usually quite still with little annual mixing of the water layers.
Over time, the lowest levels of the lakes become super-saturated with CO2. This gas can quickly escape when the lake is disturbed by a landslide, earthquake, violent storm, or other disturbance. The sudden release of CO2 can be fatal. CO2 is heavier than air and when it was released in previous explosions it poured over the rim of the crater and down into the surrounding low-lying valleys. Although CO2 normally makes up 0.03% of the atmosphere, concentrations of more than 10% can be fatal. The unfortunate villagers around Lake Nyos literally suffocated under the heavy poisonous cloud of CO2 gas.

Unfortunately, this problem is not yet solved. Scientists put in pipes to degas the high CO2 concentrations soon after the disaster, but according to recent reports, the lake now contains twice as much carbon dioxide as was released during the explosion. Earlier attempts to siphon off the gas had to be abandoned for financial reasons.

Although this is a simple question, there is not a simple answer. The largest lake can be different depending on how “large” is defined — by surface area or volume and for all lakes or just freshwater lakes. Technically, the largest lake in the world by both surface area and volume is the Caspian Sea, a salt water lake in central Asia. Due to its size and salinity, sometimes the Caspian Sea is referred to as an inland sea rather than a lake. The Caspian Sea has an area of 142,244 square miles (394,299 km2) and a max depth of 3,104 feet (946m). The Caspian Sea is bordered by Azerbaijan, Russia, and Kazakhstan1.

If size is measured in three dimensions (volume) instead of just two (surface area), Lake Baikal in Russia is the world’s largest freshwater lake. Lake Baikal has a surface area of 12,200 square miles (31,500 km2) and a maximum depth of 5,369 feet (1,637m)3. Lake Baikal holds many records; in addition to being the largest lake in the world by volume, it is also the deepest, at over a mile deep, and the oldest, estimated at about 25 million years old4. Because of Baikal’s extremely old age, life in the lake is extremely diverse. There are 1,085 species of plants and 1,550 species of animals in Lake Baikal. The lake hosts a large number of species that appear to live nowhere else on the planet, called endemic species. For example, Lake Baikal hosts the only species of freshwater seal on Earth.

It is estimated Lake Baikal holds about 20% of the non-frozen freshwater on the planet4. About another 20% is held in the Laurentian Great Lakes between the U.S. and Canada (including Lakes Superior, Michigan, Huron, Ontario, and Erie), and roughly another 20% is held in the African Rift Valley lakes (including Lakes Victoria, Malawi, and Tanganyika). Among these three regions is well over half the unfrozen freshwater on the planet’s surface. Of course, much more water is contained in frozen water — in glaciers and icecaps — but this is not easily accessible for human use.

The highest lake in the world is on Ojos del Salado, the world’s highest volcano. Ojos del Salado is located on the border between Argentina and Chile and is the second tallest peak in South America. The crater lake is located at 20,965 feet (6,390m) above sea level and is approximately 300 feet (100m) in diameter.5,6 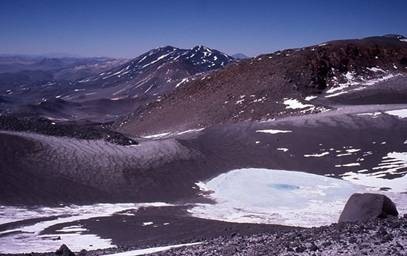 The highest lake in the world is located on Ojos del Salado, the world’s highest volcano, in the South American Andes. (Image from 5.)

The lowest lake in the world is the Dead Sea. It is located in Israel’s Jordan Valley, which is also the lowest elevation point on Earth’s surface. The surface of the lake is approximately 1,385 feet (408m) below sea level7. The arid nature of the surrounding environment means water flows into the lake but does not flow out from the lake; water only leaves naturally through evaporation or seepage. This concentrates salts in the lake over time. Lakes without outlets are called endorheic; water in these lakes does not flow out to the ocean and are often very salty — much saltier than the ocean. 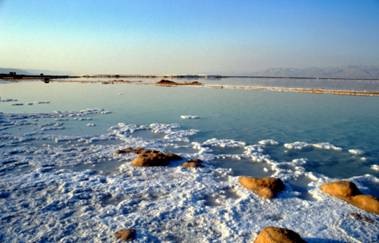 The Dead Sea, in Israel’s Jordan Valley, is the lowest elevation lake on Earth’s surface. (Image from 7.)

Crater Lake, located in the state of Oregon is famous for its extremely high water clarity and deep blue color. Crater Lake is also the deepest lake in the U.S. and the seventh-deepest in the world. Crater Lake is considered by many to be the clearest lake in the world; its clarity is only possibly rivaled by Lake Vanda, an extremely salty and ice-covered lake in Antarctica. Crater Lake is so clear, in fact, that it was discovered to be more transparent than early estimates of pure water. In the mid-twentieth century, scientists were purifying water in the lab to estimate water’s natural absorbance properties. Their estimates, based on the clearest water that could be created in the lab, were beaten by measurements made soon after in Crater Lake. Baffled, the scientists chose to revise their estimates.

Transparency has traditionally been measured using a small white disk lowered in the water, called a Secchi disk. The Secchi depth is the depth at which the white disk is no longer visible to a person at the lake’s surface. Average Secchi depths for many lakes range from under 3 feet (1 m) to about 30 feet (10 m). In Crater Lake, by comparison, the Secchi depth has been measured as deep as 133 feet (43 m).

Crater Lake was formed by the eruption of a volcano, Mount Mazama, approximately 7,700 years ago which formed a caldera lake on the mountain. Crater Lake has no river inputs and is predominantly filled with rainfall and snowfall inputs. The lack of river inputs accounts for the spectacular clarity of the lake and keeps pollution low, making the waters of Crater Lake some of the purest and least polluted in North America13. 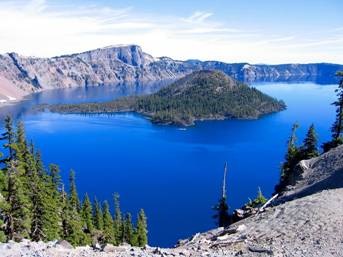 Crater Lake, located in the state of Oregon, is arguably the clearest lake on the planet. Its renowned clarity creates its cobalt-blue colored water.

Lake Karachay, a small lake in the southern Ural mountains in western Russia, is thought to be the most polluted spot on Earth. Starting in 1951, the Soviet Union used Karachay as a dumping site for radioactive waste from Mayak, a nearby nuclear waste storage and reprocessing facility located near the town of Ozyorsk. By some estimates, the lake has accumulated roughly 4.44 exabecquerels (EBq) of radioactivity. By comparison, the Chernobyl disaster released 5 to 12 EBq of radioactivity, although this was spread over a much larger area.9 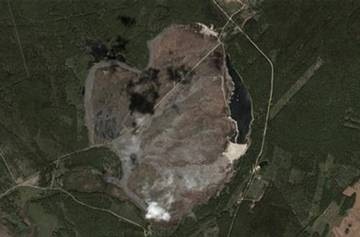 Lake Karachay in Russia is considered the most polluted spot on Earth. The lake was used as a dumping site for Soviet radioactive waste for decades. (Image from 10.)

Many lakes around the world are disappearing as water usage increases and input rivers and streams are diverted for agriculture and municipal water supply. Further, climate change is also reducing water levels in many lakes due to changes in precipitation patterns. Lake Chad, located in North Africa, is a sad but noteworthy example of this because its inflow rivers have been increasingly diverted for human use over the last several decades and less precipitation has fallen. Ironically, the name Chad is a local word meaning “large expanse of water.”11

According to the United Nations, Lake Chad shrank by as much as 95 percent since 1963. Lake Chad is economically important, providing water to more than 20 million people living in Chad, Cameroon, Niger, and Nigeria.12 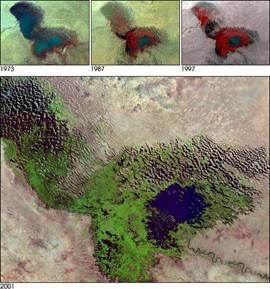 Lake Chad, located in North Africa, has decreased 95% in size since 1963. The rapid loss of the lake is the result of diversion of water for human use and lower precipitation. Many lakes around the world are suffering a similar fate as human water consumption grows. (Image from 12.)

Laguna Colorada, a shallow saltwater lake in Bolivia, is renowned for its red color and white islands. What makes this lake so striking is the contrast between the red microorganisms growing in the lake and the white borax and salt deposits in and around the lake.15 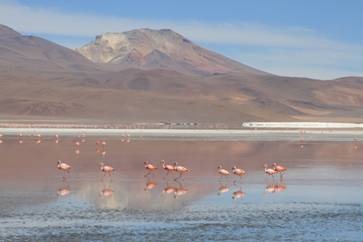 Laguna Colorada in Bolivia is renowned for its red color and white islands and shores. The red color is formed by microorganisms that thrive in its unique waters. Flamingos flock to the lake to consume its plankton which provides them with their pink color (Image by Kevin Rose).

The Plitvice Lakes are a series of 16 lakes connected by waterfalls. The lakes are located inside Plitvice National Park, Croatia near the border of Bosnia and Herzegovina. These lakes span a distance of more than five miles (8 km) and come in various shades of azure, green, and blue. The lakes also cross a large elevation gradient, with the highest lake at about 4,000 feet (1,280m) and the lowest at about 1,200 feet (380m). The lakes were formed by natural precipitation of carbonate minerals from ground and surface waters, called travertine. Travertine lakes are extremely rare.16 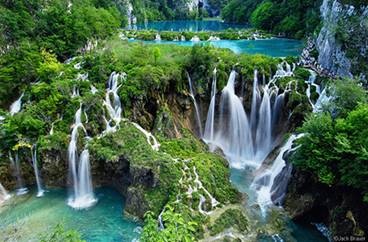 The Plitvice Lakes, located in Croatia, are rare travertine lakes that span a wide elevation and distance.

Lake Victoria, which is bordered by Kenya, Uganda, and Tanzania, is the largest tropical lake in the world. As recently as the mid-1950s, Lake Victoria had more than 500 species of cichlids in its waters. The number of cichlids and other measures of biodiversity has rapidly dropped in recent decades due to the introduction of invasive species such as the Nile Perch and increasing human disturbance that alters water quality and transparency of the lake17. 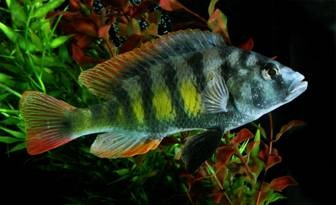 Lake Victoria once held more than 500 species of cichlids; however, more than 250 of them have become extinct due to the introduction of Nile Perch and reduction in water quality and transparency. (Image from 18.)